I traveled by plane from Kuala Lumpur to Toronto and then headed to Montreal by hitchhiking once again! I was glad to be back on the road with my thumb which almost fell down because of the cold weather haha! But eventually, I made it to the Startup Weekend Montréal! This is the story of this awesome weekend…

I am back on the Startup Weekend stage since my last one in December in India! After roaming for more than 2 months in Asia, I was very surprised to find myself again in a developed country. You are no longer the only white guy in the room or on the bus… People are also less smiley and cheerful and I could even see that during the Startup Weekend… It appeared as if most people were not here to have fun or meet people but primarily to work… I mean, come on, it is a weekend! Let’s have fun before anything else; Fun & Work! But anyways, that was just a quick cultural aparté…

Organization: The event was put together in 3 weeks. It was very professional and ruled to the minute at some point! The team of organizers & volunteers was very nice and happy to chat with other attendees. For most of them, it was their first SW as organizers. However, as I said before, I thought that the general mood was a bit too serious. Attendees were only staying within their teams and not chatting with many other people, no games were played in order to cheer everyone up… too bad. I think this was due to the absence of a real Startup Weekend facilitator whose job is to guide participants in their weekend. It is his role to explain the Startup Weekend methodology, cheer everyone up and maintain the Startup Weekend mood all weekend long! (x2 weekends… Sorry!) To sum up, the SW team did a great job! Next time, just get the right facilitator and it would be even more awesome!!! 😉

Venue: Oh Whoa! The venue was just amazing! It took place at le salon 1861 which is basically a co-working space in the basement of an old Christian church! That’s just a freaking great idea! It was spacious and completely flat! Definitely a great venue for a Startup Weekend! +1000 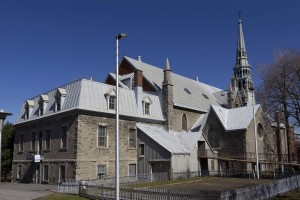 2. Pitches and Teams:
Without much difficulty, 38 people got up on stage for the elevator pitch (1-minute pitch/presentation) which is one of the best exercises in the World by the way… People were not that shy about going on stage and the queue for it came naturally. 38 is a great number and that gave a good panel of choice for everyone! In the end, 13 teams were selected by the crowd and everyone started to find their best match.

3. The team I joined: Tactile
Jordan, a student at McGill University in design pitched an idea about a mapping solution for non-sighted & low-sighted persons! It reminded me of something I saw in Luxembourg back in 2013 and I decided to join the team! We were four to share the adventure: Jordan, Sandra, Maxime and me. Jordan is from Toronto and both Sandra & Max from Montréal! I 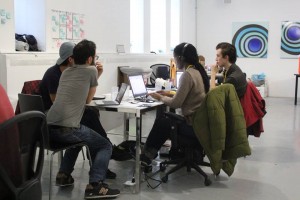 started to like this team really quickly… more than usually! Jordan is this kind of very curious and smart handyman always biking with fixing tools in his bag. Sandra brought us her creativity and a cool & smiley atmosphere while Maxime was always pushing us to go deeper with our ideas and approaches! For all those personality facts, I was very glad to join this fun, creative and smart team! 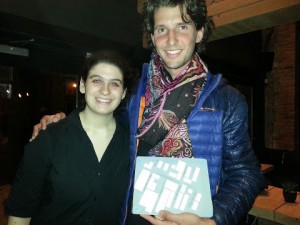 4. Final pitches:
We finished right on time to rehearse a little bit before the finals! It was a long moment with 13 presentations! This Startup Weekend Montréal was indeed one of the biggest ones I ever attended. Most pitches were pretty good and well executed with neither timing nor technical issues.

Our pitch was great! I really mean it! We had a great execution and we managed to make 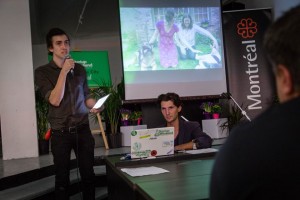 a demo on stage. Jordan was actually using the product as a non-sighted person and by putting his finger on the iPad, touching the 3D printed map, an audio went on telling street’s names for him to guide his finger… Of course, that was not 100% real but a good idea can always deceive people… it just depends on how you present it 😉

At the end of the weekend, and thanks to an awesome team, a great demo, an actual product and a freaking good user/customer validation, we got the 3rd place. One of the judges confessed to us later that our lack of environment focus really penalized us… But anyways, we did create something that clearly targets a social impact and that is sustainable in a way! 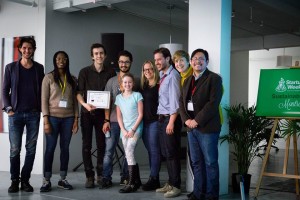 5. Conclusion of the SW Montréal:
What a great time once again! I’m so glad I got to work with this team which is definitely one of the brightest ones I ever worked with!

I always wanted to go to Québec and finally I was there! I met really bright people, made some friends and learnt a lot, once again… Even if the mood was a bit too serious between attendees, I had a great weekend in Montréal! The community is very active here and they are already planning their next SW on March 11th dedicated to the Sharing Economy.

In the end, it doesn’t matter if you arrived first, second, third, if you created the “next big thing” or whatever… What matters is the people you met there and how much you shared and learnt! And let me tell you that I will remember this 3rd place in Montréal for sure… 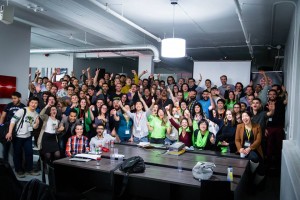 This article is dedicated to Lowell Hall, Marc Salameh, Laura Vurpillot and Nicolas Souffez for their great generosity toward a traveler just passing by…