My airplane lands in Rygge and I start to hitchhike my way to Oslo. The next day I’m at the Startup Weekend #3! This is the story of this awesome weekend!

However, the diversity in term of skills wasn’t as great! As always, business people were more numerous and they were the people pitching most of the time!

Organization: Good! This SWOslo was the 12th edition! We could see that… Everything went well from the beginning to the end! The Facilitator Wout was great and got to explain to people the Startup Weekend methodology thanks to a review of all tools and steps such as the Business Model Canvas, customer validation, Minimum Viable Product (MVP), pitching or market research! He insisted on the fact of being Epic!
The only thing I can say is the lack of interaction between the organizing team and attendees. Usually, organizers are always around, talking to people. At Oslo, the organizing team was most of the time in a room separated from the working stations of attendees. A bit more of proximity would have been perfect! This is what a Startup Weekend is also about! But anyways, +1 for organization!

Venue: The SWOslo took place at the Oslo University. It’s a very modern place full of codes to access doors haha. There was an incubator hosted as well! It was great and big enough even if teams were all together working in the same area. So, +1 for the venue as well!

2. Pitchs and teams
We saw 22 initial pitchs! That’s almost half of all participants! 4 women pitched along with 18 other men. Ideas were innovative and diversified! It was great to see so much imagination! Nevertheless, as always, many ideas turned around food but some had hardware challenges such as a drone for avalanche rescuing, a camera as a pill for colposcopy or a phone saver charger. Finally, some ideas were a bit more classical: social platforms or startup consulting.

3. The team I joined: FacebookDeal 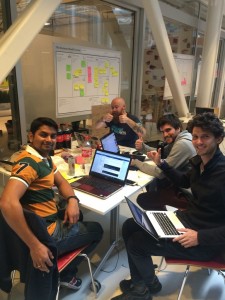 Chris, a Viking with a long beard and many tattoos, pitched this idea about resolving the eternal problem of turning followers into actual customers for companies. I really see a BtoB problem in this idea even if the market is very crowded…

FacebookDeal ended up as a web app on which shops, retailers and other clients can launch a deal to their community. To claim a deal, a Facebook user will have then to share it with friends and publish it on his profile. It’s very simple… Maybe too simple.

4. Final pitch
Chris asked me to pitch and I was totally down for that! We insisted in the simplicity of the
product, its functionality and potential customers. Our pitch was well executed but not enough original due to the simplicity of the idea I think. Since we didn’t have a representative differentiation in the product, the pitch was quite common.

On the 9 ideas selected only 1 pivoted 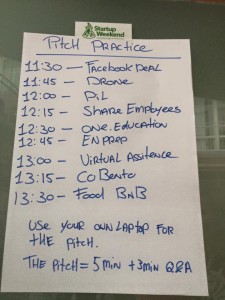 The most impressive pitch was, without discussion, the AngelsDrone’s team! They even built a prototype of their solution. The 2 pitchers were very passionate about the solution
they were building and this is very important. And, at the end, they won…

The FacebookDeal team didn’t get any prize but I learnt again A LOT and I met lovely people once again!

5. Conclusion of the SWOslo
It’s the first time I see a SW putting all attendees on an equal level in terms of knowedge of the methodology! I really loved the projects. Some teams were very creative. The atmosphere between people during the Startup Weekend was not as warm as the previous I’ve done but, at the end, we all ended up in a Pub from Oslo and played shuffleboard.


I worked with an impressive team full of talents! I wish you all the best in your future projects guys! An Epic weekend 😉

This article is dedicated to Lorna Smyth & Raffaela Schneid, Balázs Némethi and Théo Dehaze & Toril Haavas for hosting a traveler in their homes!