I hitchhiked from Oslo to Goteborg with a truck driver from Romania. There, I catched a last-minute train to Stockholm. Two days later, I was at the Startup Weekend. This is the story of this amazing weekend! 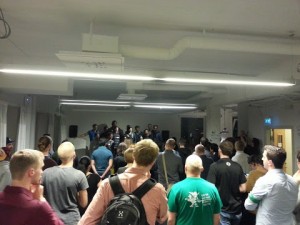 Organization: Very good! I saw an impressive team of 17 organizers who took care of attendees from A to Z. They were all very friendly! They were organizing the Startup Weekend for the 5th time and I could feel that. However, the Startup Weekend Methodology wasn’t publicly shared with all attendees: no MVP, Business Model Canvas or customer validation process were mentioned.

A real great thing was the access to hardware systems! Since it was an IoT edition, we needed to build/make prototypes! We had then access to many spare parts from Arduino, Raspberry or LittleBits and that was awesome!! At the end, on 9 teams, 5 had a hardware prototype! So, organizers, you rocked this edition! Applause for you guys!

Venue: The SWStockholm IoT edition took place at Things. It is a young incubator dedicated to hardware and IoT startups. There are several startups incubated and an amazing maker space with a ton of material! The venue was spacious. So, +1 for the venue!

2. Pitchs and teams
28 ideas were pitched. Each person has 1 minute to pitch. This is the time you have in a Startup Weekend to share your idea. Be quick and precise: Problem, solution, name of 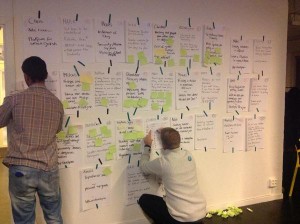 your idea, who you need. THAT’S IT! 5 women pitched and 14 projects got selected after voting… Some died on the road to end up with 8 teams. That’s life.

Since it was an IoT edition, there were many challenging and crazy ideas such as a
Heping Hand to give you an umbrella in case of rainy day, a Smart Toilet System, a bow tie that would switch colors regarding your emotions or even a smart belt. On the other side, we saw many IoT ideas more common especially around the parking space or ticket problem… This sector is very crowded in my opinion. Finally, some pitchs were not at all IoT and we had ideas such as the eternal partying, travelling and dating applications along with the common food startup. But there were also more original ideas as a platform for volunteers to find the best NGOs, a biking community or a laundry booking system.

So, I joined the Toilet guys and it was super fun: the funniest team I ever worked with so far! Indeed, our concept was fun… I mean, we were building a system to know which toilets are available or not. Our name was fun, our logo was fun and same for the team! However, we built a very professional prototype 100% functional and we had a viable Business Model along with a market strategy. So, Fun but Pro at the end 😉 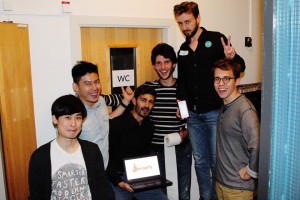 Crapify ended up as both Hardware and software solution. A device connected on toilet’ locks send information on a web application that tells users which toilets are occupied or busy. We also keep data about the time average spends into toilets (so we knew who take a shit at the SWSto…), number of toilet’ visitors etc etc! Our website is still running and you’ll find a link soon enough below 😉

Our weaknesses – Not much to be honest…

4. Final pitchs
We felt like Pawel, Head of Crapify or CEO of Crapify (choose the funniest), should pitch. Together with Valentino (a crazy Italian guy who hosted me to his place), we wrote a scenario comparable to a theater play. The pitch told the Story of François, a travelling guy going to Startup Weekends all over the World and eating tons of free food there but who cannot find available toilets to release himself. I was on stage with Pawel and we made an amazing duet. Oh yes, you can see the video of our pitch right here!

On the 8 teams, only 1 completely pivoted. It means that they switch their initial idea. This is something I’ve noticed so far; teams actually stick up to the initial idea. Only few of them pivot at the end. I would say around 2 out of 10 do pivot in average. Moreover, there were two “1-man-team” ont the top on the 8 teams. That takes courage to do a SW alone and to pitch what we’ve reached… #Respect

Our pitch was warmly welcome and people had a lot of fun watching us I think because our prototype was actually showing right now toilets being used and because it was a CRAZY idea! Hahahaha!

At the end, we got the first place! We won the Startup Weekend Stockholm IoT edition and going back to my sit I found a coin of 5 Swedish Krona on the floor, it’s also the price of public toilet in Stockholm. That was a sign haha! The lucky 5 Krona! 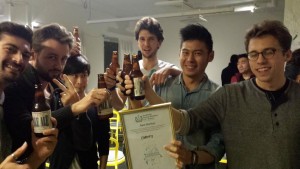 5. Conclusion of the SWStockholm IoT Edition
It is so far, and by far, the BEST Startup Weekend I ever participated to… and I’ve done 8 of them… I saw a lovely organizing team, bright people, cool people, curious people, an amazing Crapify team, a crazy working concept and a beautiful city! It’s the first time I’m in a team in which we built such an advanced solution just over a weekend! Now, let’s keep on!


The general atmosphere was awesome! Thanks organizers for contributing to it! This is was a Startup Weekend is about: Fun and meeting people. 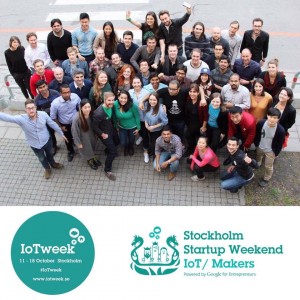 I’d like to thank my teammates Pawel, Kirill, Valentino, Kenneth and Nori for sharing with me the money of the vouchers. I’ll use this money for a good purpose: travelling J Good luck with Crapify, keep me posted, and maybe see you in another life in Sweden!

This article is dedicated to David Davila, Valentino Giudici (AKA DJudge) & Valentino Pacifici and Kirill Groshkov for opening their homes to a traveler passing by Stockholm. Merci.

And of course, to the Crapify team!

7 thoughts on “Startup Weekend Stockholm (SW#4): An IoT edition and a 1st place!!”