Last time I wrote that Medellin was my second home. So what comes first? I was born and raised partly in the French town of Angers (Wiki). Angers is a small city (ranked 19th most populous in France) from the Northwest. It is well known for its rich medieval history and art, local wines & spirituous such as the Cointreau and some food & agricultural specialties.

But recently, Angers was certified as an Internet of Things (IoT)

hub by FrenchTech. FrenchTech is an ambitious national program that has been developed by France for 3 years now. It aims at certifying some key French cities in order to foster numeric initiatives – startup creation, digital jobs, co-working spaces, technological structures…– in France. I live indeed in a protectionist country where the State has always been very involved (do you remember when Yahoo! tried to buy Dailymotion? – the French YouTube) and this program is the proof of the involvement of public bodies in the Tech scene! Is it bad, is it good? I don’t have much data so far to make my own opinion but at least, the government seems to understand what a Startup is now…

So my point is that Angers was recently named a city hub for the Internet of Things (IoT) branch of the vast program. IoT – or “Objets Connectés” in French – is the ability to give a digital life to a tangible device. A great example is the connected watch from Apple or the Fitbit bracelet. Some are very common, such as devices to control your home or track your body, and some others very original such as a connected fork or baby diapers. I am not a specialist on the theme but I can at least brag about the Startup Weekend IoT I won in Stockholm last year with my great international teammates: the article right here.

So I have been back in Angers for two months now and, even if I broke my ankle recently, I decided to try to meet the local startup ecosystem with my World Tour story as a hook. Angers is a medium city with a very new Startup scene so I took my crutches and went quickly outside to talk with entrepreneurs, co-working spaces and public facilities. Here are some facts that, I hope, I’ll improve with more details in the coming months.

As I wrote above, the State tried to position Angers as the IoT specialist. And to be a specialist, you need to understand the concept! That’s why the brand new “Cité des Objets Connectés (COC)” (the city of connected devices) was inaugurated in June 2015. The cité is a vast two-acre space dedicated to the prototyping phase of IoT projects.  Inside, you find offices, meeting rooms and two huge empty warehouses, but the heart of the place is the Maker space if I can call it so. This part is clearly the working area and you’ll find all equipment you need from 3D printers to very impressive high-tech machines to start producing pre-series of the devices developed there. Equipment is brand new and impressive for a city such as Angers! 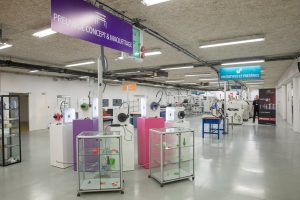 The pleasant cité was funded by a set of 17 entrepreneurs and private investors led by Eric Carreel, the famous co-founder of Withings – who is the role model of French know-how in IoT! So far, the COC has helped about a dozen projects and their closest success story answers to the name of Hector (and I’m not talking about the movie Troy): a very cute cube that informs you about the current temperature of the space you put it in. Their prototyping phase at the COC was a success and they are now producing and selling here!

I was not received by the director of the COC but I had a lovely time walking around and getting explanations by her assistant. Thank you for sharing!

Two years ago, two local entrepreneurs opened up WeForge: the co-working space in Angers. As I saw many of these spaces during my World Tour, I decided to pay them a visit the day after I was back in town! I was warmly received and Maxime, one of the staff members, even gave me a tour introducing me to all startups, employees or nerds around!

This space is impressive by its size! They have around 30 companies that rent offices there! As I was visiting, I figured out that the profiles were very different. Indeed you’ll see traditional companies renting an office for their small team, entrepreneurs working on their projects, freelancers who just need a space to work from or people working remotely! Here, there is no Startup incubation; it is all about renting facilities so far!

Even though WeForge is not a co-working space in the sense that anyone can join and come to work here at any time, or an incubation space with Startup coaching etc., the idea is here and I’m very glad to see such an initiative in my city! Also, the space would be a perfect place to organize a Startup Weekend… See below…

To set up my article, I needed a third actor: an entrepreneur. With some help I decided to meet Mickael Esnault. Mickael is a Western (of France) entrepreneur who started with goodies for companies before creating a vast consortium of companies behind the brand InWest. Its objective is clear: unity makes us strong.

InWest currently helps 12 companies with their strategy, investment needs and growth. Most companies come from the digital area but some other are more down-to-earth like the portal Siliconvalley.fr, which offers business trips to the Silicon Valley to French professionals & companies.

Even if InWest takes shares into all the companies under its wing, Mickael doesn’t see himself as a Business Angel but more as the leader of a professional community always moving between Angers, Paris and San Francisco.

Angers hosted on June 8-9 the ENOVA exhibition dedicated to… Internet of Things. This first exhibition in the small Western town is a clear signal of the positioning of the city on the Tech scene. Angers wants it all for connected devices!

Finally, and that’s very fresh news, Angers will host its very first Startup Weekend on January 13th at WeForge! We just started working on it with a local team and we look forward to meet all Startup curious from Angers!

This is the end of my little tour in Angers. After Medellin – my adoptive city – I really wanted to write about Angers – the city of my roots. I tried to be quick and if you just should retain one message after reading this article (if you do…) is that the Startup wave is everywhere… even in Angers. I hope I’ll soon be able to improve this article and add many more references about this small city where the air is balmy…