After traveling with an average of 17 USD per day, I went one step further and cut my budget in half while traveling Central America!

Back in Léon, Mexico, I forgot my credit card in a HSBC ATM that didn’t remind me to take it back. The next day, I realized I couldn’t get my card back and I had to ask my bank in France to issue a new one and ship it to me when I get to Colombia. So, I would have to do without it for the next 2 months at least. I’m a true believer of the American saying; “If life sends you lemons, make lemonade”. So, I adapted to the situation. I still had cash and a good friend to help me here! So I managed to finish my travels in Mexico without much trouble.
We are at the end of April and I’m living out of some USD cash I’d had since Europe… I met friends who are also on a tight budget and that helps to stay on the track! Among them, Eladio – a Spanish traveler – is going South as well. In the Cascadas of Roberto Barrios, we decided to sail together for a while. 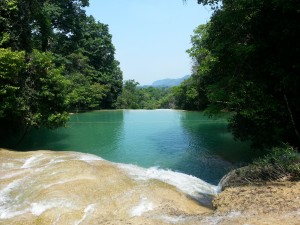 We take decision from our office in Roberto Barrios, Mexico

That was the first time I would be traveling with someone in this adventure… A new thing for a lonely traveler like me. And well, it was really cool!
So traveling with someone is less boring and brings you more motivation when it comes to make some sacrifices and to commit to the constraints of the trip! So we lived simply and used our modest resources:

1/ Hitchhiking
We hitchhiked from South Mexico to Granada, Nicaragua where we said goodbye to each other after 3 weeks of traveling together. Hitchhiking is so much better with someone!!!! It can be harder but it is way more fun haha! It is hard to be alone on the road with your thumb stuck up in the air… Especially when no one is stopping for you and it is freezing out there (I hitchhiked in Toronto in February). When you have a pal with you, you can joke, you take turns, you ask twice more people in gas stations etc. It is so much better! 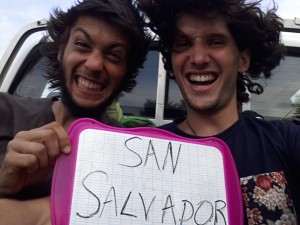 Arriving in San Salvador in pick-up

2/ Camping
Get the tent out!! I used my tent for the first time in Mexico, 6 months after starting the trip! It became a precious ally for keeping a tight budget in Central America. We camped in hostels, national parks, public parking and on the beach! What’s more beautiful than waking up with the ocean right in front of you? 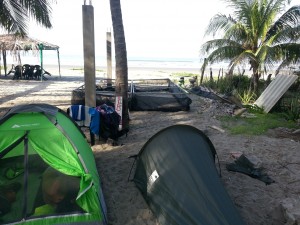 We hitchhiked with the owner of a beautiful hotel and he let us camped there! Cuco, El Salvador

3/ Couchsurfing or finding people to host for free
We used couchsurfing at least once in each country. Both of us were very familiar with the website so we just kept on doing what we knew. People hosted us in Mexico, Guatemala, El Salvador and Nicaragua. 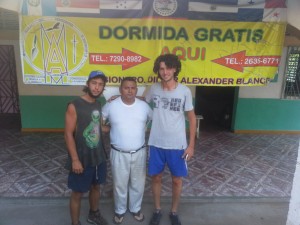 4/ Making food or getting food
When it comes to traveling, your money is going in transportation but we had our thumbs for hitchhiking, accommodation but we had our tents for couchsurfing and food but we cooked or got cheap food… In the morning, we always had some fruits with oats, chocolate and water or milk. We would always find a mango tree somewhere and borrow some delicious fruits 😉
When cooking was hard because of lack of facilities, we would go to the local market to get the cheapest food… Cheapest doesn’t mean dirtiest unless you are going to the very last restaurant opened in the market at 9pm and ate a soup… I suffered from food poisoning and had some terrible days in Mexico because of that attitude.
But in El Salvador, we found the perfect solution: the Pupusas!! Pupusas are the National dish. They are delicious tortillas filled with cheese, beans and meat… You can find tons of different Pupusas. And they cost on average 0,40 cents. For 1 USD we had 3 Pupusas and we would get full! At breakfast, lunch and dinner, there were Pupusas! Alalala, I miss you El Salvador…

5/ Juggling at traffic lights
We had to spend a little but we also earnt a little. Several times on the road, in Huehuetenango, Guatemala and San Salvador, El Salvador, we did Malabares. It is basically performing in front of cars stopped at a traffic light and getting a few coins for your performance. Eladio knew about poi and me, well, I could smile and speak Spanish with a foreign accent… So while my Spanish friend was performing and breaking his fingers, I was going between cars with a hat and my little pink cardboard with ‘Aydanos a viajar’ written on it! He was sweating under a burning sun doing a physical performance and I was smiling to windows while telling our story to get some money… That’s fair no? Anyways, we became a team and we made a little bit of money like that… For Pupusas!! When I told that to my mom, she went nuts telling me I was begging on the street… I had to explain that it was a traveling thing here in Latin America… Indeed you see many travelers doing so! 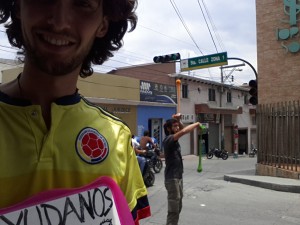 So, this is how I lived on a very very tight budget over 1 month across Central America. Being with someone really cheered me up because Eladio was more committed than I was haha! I had an amazing experience living a new kind of trip in the company of my friend! I’m glad I lived that experience and one day, when I’m rich, I’ll think about that haha!
So don’t be afraid of what life sends you, just adapt and deal with it because that’s maybe a gift but you just don’t know it yet…
I ended up finally asking my beautiful mom to send me money via Western Union so I could arrive in Colombia in good conditions. Thanks mom!

This article is dedicated to my dear friend Eladio! Hope to see you soon in Colombia! Safe travels!