After spending 3 weeks in Montreal, I headed back to Toronto to attend the Startup Weekend Peel! My 10th Startup Weekend in this Tour was such a great experience. This is the story of this awesome weekend…

The SW was held in Brampton, a small town about 30Kms away from Downtown Toronto. The previous Startup Weekend in this area was organized 2 years ago. So a brand new team is now back on stage to give this town a new entrepreneurial spirit! First, I was very surprised to see so much cultural diversity in this Startup Weekend. From Asian to Caucasian-looking along with black American and Indian, all colors were attending: A beautiful rainbow Startup Weekend!

Organization: It is hard to recreate an event from scratch after 2 years of nothing; new partners, new sponsors and a new team! However, this organization did just great! They were very professional and always happy to help and chat with attendees! So, very good job guys! 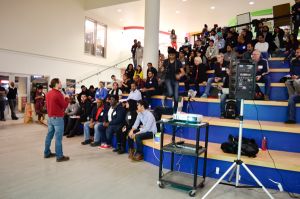 Venue: The Startup weekend was held at the Sheridan College in Brampton. This college is mainly specialized in engineering. The venue was pretty OK but the room where attendees were working was a bit too noisy sometimes. However, we could all attend presentations in a very nice Atrium space with an amphitheater and that was cool!

2. Pitches and Teams:
On Friday, I counted 37 people pitching for the elevator pitch (1 minute presentation)! What a great number! Everyone could workon very diverse ideas BUT as I always say: it is not about the idea; it is all about 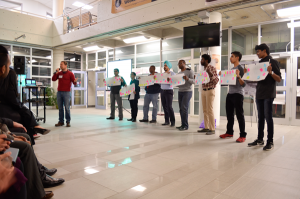 the people! This is why I kept hesitating between two young smart guys to work with and I eventually made a choice… (see below) In the end, 8 teams were formed but it was too late to start working on projects. The venue was indeed closing. It means that no one did work before Saturday morning! That was the first time I didn’t start working on Friday… In a way, it was good to give time to people to talk to each other and make the best choice when joining a team but on the other hand, it gave us more workload on the Saturday.
The next day, on Saturday, one third of attendees didn’t show up… So many people had left for different reasons but mainly not for being selected… That’s too bad! The idea is to work, build something and learn from the others as a team. It is not only about working on their own idea! Make some effort people!

3. The team I joined: QuickER
Shrey, a young 16 years old little guy pitched an idea about how painful and annoying waiting times are in Emergency Rooms in hospitals. He did experience the situation with his dad who almost lost his finger once and I remember experiencing the same problem back in France when I was younger! So the problem made sense and this young guy and the teammates seemed pretty cool… I was all set up to work within this team!
We were 6 working on that project with an emphasis on business and coding skills but nothing in design… My teammates were good listeners and we all naturally made up tasks and set up objectives while building our solution! I loved this natural organization flow! 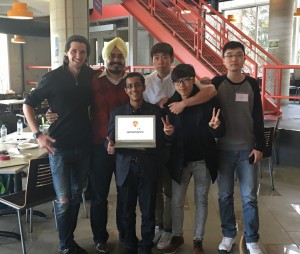 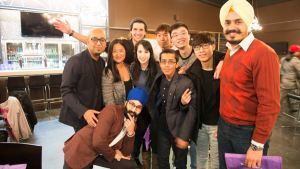 with the Rapid Team

4. Final pitches:
For once, we were very good on schedule and we had time to prepare a good presentation using Emaze and rehearsing enough! In the end, we made a very professional pitch for which Shrey was the main speaker! Everyone was pretty impressed to see such a young guy leading a presentation with that confidence and clarity! Good job buddy! However, we didn’t get enough time to finish it and we rushed a little bit too much 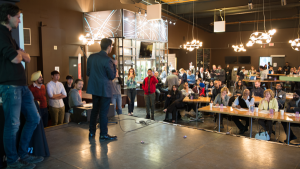 on some key points.

Anyways, judges clearly saw the values we were bringing on the table and it worked well for us because we got the 2nd place!!

I was very impressed with the general level of the teams! Indeed, ideas were diverse and almost everyone came up with a prototype. But the most amazing thing was the Validation executed by the teams! Everyone talked to people over the weekend to get feedback and adapt their MVP to that. This happened thanks to a great facilitator leading the event and sharing the Startup Weekend methodology in a good way: Daniel Johnsen. He proved the importance of having a Startup Weekend facilitator… Something that my last weekend in Montreal didn’t have. The difference was huge in the quality and the general mood at the end!

5. Conclusion:
Great moment, great people, great team and an awesome general mood! This time, everyone was talking to each other and people really connected! Bear in mind that this is a weekend where attendees pay for working… You better not be too serious about it and go there to have fun and meet new people! I was surprised by this Startup Weekend that I didn’t expect to be so good! Thank you Peel and your team for making it one of the best events I ever attended!

This article is dedicated to Harpreet Zingh and Lowell Hall for opening their homes and giving a couch to crash to a traveler just passing by in the coldness of Ontario.