My airplane landed in Dublin on Thursday. The next day, I hitchhiked my way to Galway for the Startup Weekend #2! This is the story of this awesome weekend!

The usual three 3 categories (see SWNA article) were there! As usual, the non-technical (business wizards) were dominant. None team had the perfect BDD (Business, Designer, Developer) but participants were enough diversified even if it wasn’t perfect!

Organization: SWGalway is a young event. It was indeed the second edition! The organizing team was composed of 6 people. They smartly spent time on connecting 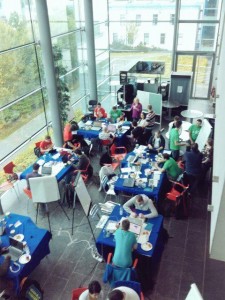 people together and had other activities. However, participants were not given special advice about the Startup Weekend methodology & vocabulary (Business Model Canvas, Customer Validation, MVP…). The organization was definitely good and will be improved; I’m sure, with more SWGalway to come!

Venue: The SWGalway took place at the GMIT (Galway Mayo Institute of Technology). Teams were working all together in the main hall which was big enough but quite noisy. Each night, the doors closed at 10:00pm. So there was no night working in Galway… which was not a bad thing at the end. I’ll tell you about that more into details in the conclusion…

2. Pitchs and teams
Irish shyness, there was few initial pitchs but after pushing nudging
people, everyone wanted to pitch haha! We assisted to 21 pitchs in total and 8 ideas were selected to set up teams. What about ideas? Well, as usual many about tourism, partying and social app. Only few really stood out. Participants had 3 votes each to share out between the most interesting project(s) according to them. At the end, a good diversity showed up even if most of projects were oriented on 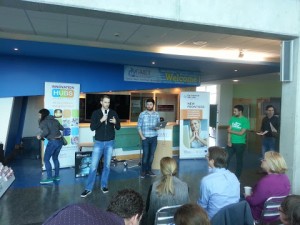 a social experience, or to say in other words, a BtoC model.

3. The team I joined: Roast
Roast is a web platform on which customers can post problems they experienced with a product/service and vote for their relevance. The more votes a problem gets, the bigger the issue is. After collecting those kinds of data, Roast treats them and delivers them as beautiful graphs and statistic charts to clients. So basically, Roast is the middle agent between unhappy customers who spotted a problem and companies looking for feedbacks to make the best product/service possible! We were 7 in total working on it! Six men and one woman from China. Jonathan Smyth was leader of the team (picture). 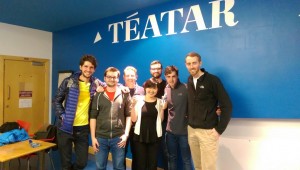 4. Final pitch
Jonathan, the leader of the team wasn’t very comfortable pitching and I knew that I’m a good pitcher. However, pitching was an opportunity for him to improve his skills! Therefore, I took a step back and for the first time in a Startup Weekend, I didn’t pitch but I coached someone for doing it! That was a true exchange!

On the 8 teams initially formed, 3 completely pivoted and presented a solution very different from what the initial idea was. Since we had no designer, our presentation was not the prettiest but we were the only team to have an actual prototype. However, we had only 4 minutes to present and not the usual 5 minutes… So short! Because we were running out of time, we couldn’t properly talked about customer validation which was the other key argument of our pitch!

Presentations went on very quickly in a beautiful amphitheater. After a vote from the public from which we got the first place, the judges finally had their Top 3 and we got the 2nd place! I could see the team a bit sad not having the first place but it doesn’t matter. The most important things are to have fun/learn/exchange and meet people.

5. Conclusion of the SWGalway
I loved the general mood. It was all about learning from each other. No superficial pressure a 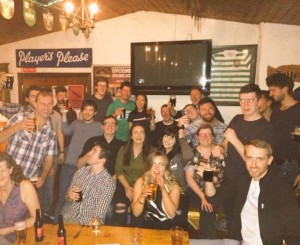 t all! We watched Rugby durint the Startup Weekend and on Saturday night, we all went out for a couple (or more) of beers in a Pub! This was a true Startup Weekend Made In Ireland. Sunday was quite difficult for some but everyone made it! I just can tell
SWGalway to better prepare participants to the event by telling them more about the methodology. Everything else is under control!:)


It was hard to be accepted at the beginning in a team in which you’re a foreigner but I succeed in sharing my ideas and I learnt a lot from the Roast team! Thank you guys! Consider me as a friend now 😉
Cheers!

This article is dedicated to Olivia Lavelle and her son Caluan from Galway and Daniel Drysdale from Dublin. Thank you for opening your homes to a traveler…

One thought on “Startup Weekend Galway (SW#2): A cool atmosphere and a 2nd place!”