I hitchhiked all the way to Nantes from Angers (France) and arrived just in time for the warm up and pitchs opening! This is the story of this awesome weekend! 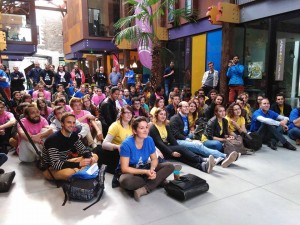 Organization: We assisted to the 6th edition of SWNA! Organizers knew how it works. They got used to it. I noticed it! There were at least 8 people in the organizing team and they did a great job!

Venue: The Cantine Atlantic 2.0 is quite an interesting place! It’s a mixt between modernity and past. You seem to enter in an old building through a traditional façade before getting in a very nice corridor surrounded by kind of modern sheds built on floors. And, last but not least, it is in downtown! So you can get out of the building to ask people whatever you want to! So, definitely +1 for the venue!

2. Pitchs and teams
We saw in total 37 pitchs! It’s about 1/3rd of all participants; quite a lot! 7 women and 30 men pitched! Ideas were pretty diversified: many around culture and travelling, some about the sharing economy, the inevitable party mobile app. And some others ideas were more challenging such as an automated Business Plan generator or a connected desktop light! Of course, I saw many web applications or mobile app but this is normal, over a weekend, it’s the easiest way! I saw that originality was more on marketplaces: students searching for fundings from the State, people who want to cut their hair at little prices for example.At the end, 17 teams were selected to follow the Startup Weekend adventure! Wow! I was impressed to see such numerous teams! It means that we will see at least 17 presentations for the finals on Sunday.

3. The team I joined
I chose to join the smallest team (4 people). Léo, the leader of the team was very cool, easygoing and we had a lot in common so I chose to bet on the person 🙂 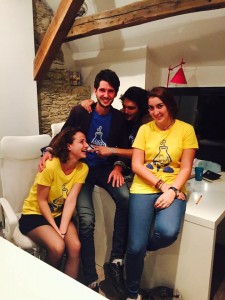 This is how I got in the team Cutit! We basically made a web platform to find people (students, professionals or anyone) with hairdressing skills in order to cut your hair at home. You can access to a very broad ranch of prices and a quality guaranteed by the web platform. Imagine a platform like AirBnB for the hairdressing service!
From the very beginning, and that was awesome by the way, SWNA attributed to each team a mentor! That’s how we met Karim who was great and who really pushed us to get out of the building to get feedbacks from potential users, hairdresser and potential clients from the streets of Nantes!

4. Final pitch
On the 17 initial projects, only two really pivoted on their core characteristics! All the other ones stayed much linked to their initial idea! 17 pitchs is a lot! It took about 1hour30min in total!Our final pitch was very original since I got my hair cut in front of everyone… See the picture here and video here! That was to show that our idea was actually already on the tracks! Thanks to all our efforts towards customer validation, the jury really saw that our solution brings value despite the fact that it’s not very “sexy” or impressive! Challenge succeeds! 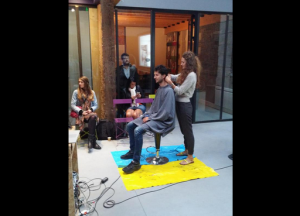 We got the 3rd place on 17 projects with the smallest team of the weekend! Léo, the leader of the group, really wants to continue with it and I wish him all the luck with that!

5. Conclusion of the Startup Weekend Nantes
It was great, very well organized and all projects were very qualitative thanks to a good diversity of skills in teams! For example, every team had at least demonstrative mock ups! That means that everyone was able to show their idea through design and images! This is a key in a presentation to make it clearer!

I really learned not to go to fast and get feedbacks first! Going on streets and talking to people is soooo valuable! Not doing it is like working in a cage without light. #CustomerValidation